PFT Is A Media Resource Of Henson & Kitchen Mortuary 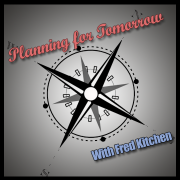 If you would like more information, speak to Fred Kitchen or any of his team feel free to call? 304.736.8986 or email us at pftradio@gmail.com or fredkitchen@hensonmortuary.com

"We take life’s most difficult end of life questions, concerns and challenges and turn them into manageable nuggets of information, so that you can make the best decisions when you are Planning for Tomorrow." --- Fred Kitchen

Journey After Losing A Child

On April 6, 2001, Barry Kluger began his day with a round of golf. While on the eleventh hole, he called home to check messages and received the news every parent dreads- his eighteen-year-old daughter, Erica, had been in a car accident. Frantically, he called the hospital, not realizing that his only child had already been dead for seventeen minutes.

By sharing his most loving memories of his daughter, Barry Kluger has written a powerful book filled with humor, heartache and an unflinching form of introspection. In his words, we see our own losses, and possibilities of life also.

Recommend this page
© July 2011 - 2019 - Planning For Tomorrow Radio Program with Fred H. Kitchen is a division of and the sole property of Kitchen Family Funeral Services, Inc.